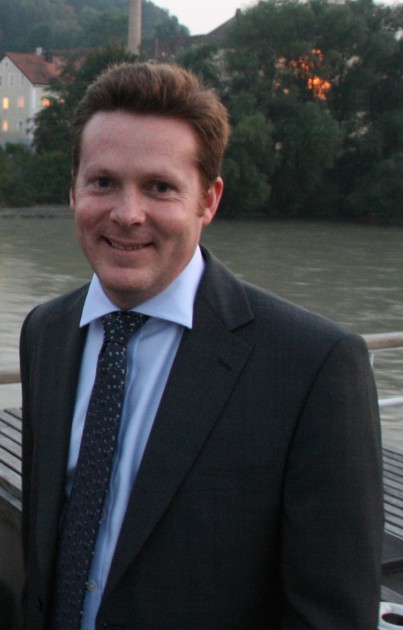 Because you can have a great conference dinner on a boat

To hear of anyone’s passing is a sad moment, but have news of the death this week of Luke Foster is particularly difficult. To be taken by a brain tumour as his life was in full flow is cruel, most especially for his wife and family, who have the deepest sympathies and condolences of those who knew and worked with Luke.

From the first time I met Luke, when he started in the UACES office, I got on with him. Always with a wry smile, professional without being stuffy, ready to run with an idea (and to call out the failures), Luke was a very easy-going man to be around. And so it was, as we both worked through different roles in the Association and he became Executive Director. It would be fair to say that we couldn’t have asked for a steadier pair of hands during that time and I can’t think of a time when there was anything that he faced with that he couldn’t handle. Even when he got his diagnosis last winter, he took it in his stride: I’ll particularly remember gatecrashing the office Christmas meal – prosecco and sarnies around the office table – and the way Luke brought some happiness into that room.

Luke embodied so much of why UACES is what it is: friendly, approachable and willing to make the very best of what’s out there. His industry and his good humour – not least when it would get to the point in the annual conference when it was all done and could be tempted to have a celebratory glass of some local produce – will stay with me for a very long time.

It’s a mark of his all-too-brief time with us that I find myself telling a wide range of people this sad news and thinking of how it will affect an almost equally large group. To have seen the constant flow of people who left messages for him at the conference in Bilbao last month was to know how much we will miss him.

We talked then of how much Luke would have enjoyed being there. We raised glasses then, and we’ll raise a glass now.

A business view of Brexit | In memoriam: Luke Foster | How the UK debates the EU | Ouzo and Out! What’s in it for Greece after ‘exiting’ the Euro 2012? | What Did the EU Ever Do for Us? |