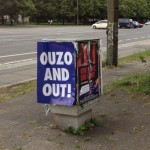 My German colleagues were certain: Germany was going to kick Greece out of the euro: but which one? I considered it unprecedented luck being in Berlin on the day of the Greece v. Germany football match for the semis of the Euro 2012 championships, during my participation at the EPSA annual conference. Walking alongside the former East and West Cold War borders, fans had been gathering by the Brandenburg Gate early on to watch the game on the big screens. I was surrounded by thousands of Germans in full attire of flags, face paint and other team paraphernalia and had to remain under the radar about my national identity. The outcome of the game was humbling but the excuse was that a small team like Greece was taking up one of the strongest teams in the world. Nonetheless, the message on the posters on Karl-Marx Allee was clear the following day: Ouzo and Out! (Yet still in the Eurozone.)

But are things as simple in the political arena? Last week’s election results in Greece were met with a sense of relief by the European partners and the international markets—albeit in the latter case it was quite short-lived. The challenges the Eurozone is facing are getting more complex, the pressures are growing stronger, and the attention is shifting (quite rightly) to Spain as well as the most recent Troika-bound member state, Cyprus. The European atmosphere, although still quite tense, has been infiltrated by a rhetoric that starts bringing into focus a consideration of which terms of the bailout agreement for Greece can be relaxed (and for how long). At the same time, ideas on a banking union, measures of growth and other similar topics that reveal a stealth shift towards balancing pure austerity are now on the table.

But can the new Greek ‘coalition’ government take advantage of the situation? Achieving consensus is hard—especially in a country where no prior history of political consensus actually exists at least by standards of comparison vis-à-vis the hallmarks of consensus politics countries like the Netherlands. The tendency that regularly develops is one between consensus as the lowest common denominator for policy-making, and efficiency/effectiveness of public policy itself. In that regard, the minimum standards set out between the partners in this coalition government do not necessarily guarantee either achievement of the goals set in the bailout agreement or successful balancing measures against austerity.

Does the new government represent the interests of Greeks as expressed in the electoral results in a fairer, more proportional way? Certainly, coalition governments tend to represent different strata of the electorate on a more equal basis, but this needs to be linked with consensus above. Consensus models of democracy are based on sharing of power, with minorities formally included in the process and decentralization of government. In Greece, despite the move towards a coalition based on consensus, the political system still remains majoritarian-based. The winning ‘party’ or ‘coalition of parties’ exercises virtually limitless power within the political system since it maintains an absolute majority in parliament. At the same time, it is effectively still creating winners and losers as the two camps have been clearly demarcated: pro-bailout and anti-bailout. Therefore, there is an evident lacuna regarding the capacities of the new government to actually create a system of fairness across social groups; one that is based on what the leading government partner, New Democracy, coined ‘Unity government’—especially with the level of involvement by the other partners that we see now.

On the same level, this coalition government cannot guarantee necessarily better quality of policy output—the risk here is that on the one hand, the lowest common denominator is agreed at least at the coalition partners level, whereas on the other, the Troika may come in with higher demands than those that can be agreed upon at this stage domestically, they may even ask SYRIZA to co-sign any new agreement. The process will then come to a halt with unprecedented consequences.

The challenges ahead are based on internal and external interactions. The new government will have to convince the international markets and the European partners that (a) it can be credit-worthy and (b) that the proposed changes to the memorandum agreement that it is about to bring forward will yield concrete results as a counter-balance to the austerity measures. Yet, it is not so much the Greek government being ‘scrutinized’ from outside—recent reports reveal that more than 70,000 new public sector employees were hired in the last two years of austerity. The determining factor for success is the toleration of the electorate for favouritism. The question remains then, whether the electorate will treat the ‘new’ political elites in the same way that it did over the past few decades, or whether it is mature enough and ready to move away from those practices. Although the laws of economics teach us that ‘supply creates its own demand’ on many occasions, the absence of demand for such practices by the electorate may turn the political system away from clientelism. In any case, this is the cornerstone of all evil in Greece, and I think that it takes sincere effort and political leadership to achieve such a clean break from the past (let’s refer to similar efforts by the post-communist countries in their transition periods). Unfortunately we don’t experience any of the two in Greece so far.

So overall, it remains to be seen whether the new government will manage to keep up with the expectations, or will get entangled in the never-ending spiral of Greek politics of succumbing to specific social, professional, economic and political interests and agendas. The first test lays ahead in the EU Summit this week, and I hope it’s not “ouzo and out” this time.

This post first appeared on the Greece at LSE Blog  the 27th of June and we thank them for allowing us to cross post it.

Dr Exadaktylos is a Lecturer in European Politics at the School of Politics, University of Surrey.