Most importantly, it’s the launch of our new Jean Monnet Centre of Excellence in the Centre for Britain and Europe, with many excellent speakers (and me). You can follow the discussion on Twitter on #SurreyBritainEurope and by following our account.

But it’s also important as the deadline for talks on the Future Relationship.

The continued non-progress in negotiations has meant that today’s informal European Council, slated for several weeks as the decision point, will not now do anything more than receive a status report.

While this might be seen to be a positive, in that talks haven’t collapsed, it’s also clear that any possibility of concluding even a partial ratification on both sides before 31 December is looking vanishingly small. My two regular trackers below highlight the lack of time and the scale of the task.

One silver-lining: it means our keynote speaker, Katya Adler, is unlikely to get called away by breaking news. 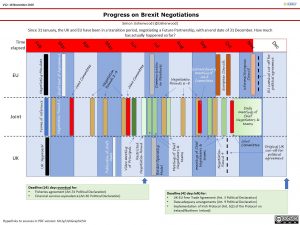 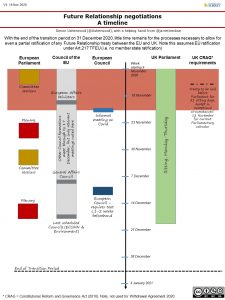