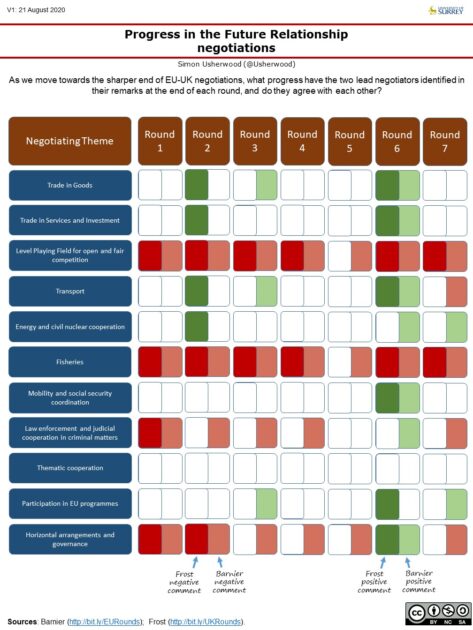 As we roll back round that time of year when schools briefly re-open and we all head back to the office [sic], it’s worth considering the progress made on the Future Relationship talks.

Recall that after the June decision that no extension to the transition period would be sought, the UK government pressed for – and got – a commitment to redoubling efforts to complete negotiations in time for the 31 December deadline.

That meant more rounds of talks, and well, not much else.

The graphic above notes the positive and negative comments in the written statements from the two lead negotiators, up to and including for last week’s 7th round.

As you can, they agree on what they think, but otherwise you can also see that the problems of March are still the problems of August: LPF, fisheries, governance and law enforcement.

About the only bright spot was the early August movement on the architecture of any deal, with the UK seemingly coming round to the EU’s position that this should all be in one legal text, not many.

All of which is to say that we seem to be at the point where the technical negotiations now need political bargains to be struck: this is above Frost and Barnier’s pay grades.

For various reasons, that political meeting needs to happen by late September – early October if there is enough time to be relatively certain about ratification before the deadline.

Current mutterings suggest a late October ‘informal’ option, which means someone obviously likes the thrill of it all and/or misses the heady days of 2019 when it all went wild.

If you have a hat, you might want to hold onto it.