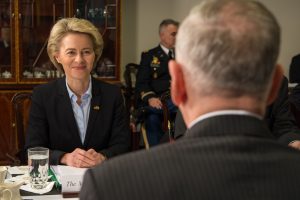 She swept around Brussels, meeting and greeting various groups in the European Parliament, generally trying to help them accept a deal that appeared – mainly because it actually did – to pull the rug from the Spitzenkandidaten model.

If most of the Brussels bubble attention was on her credentials to take up the role, the UK press has focused more on her lines on Brexit (here and here). On this subject, she various said that she’d like the UK to remain a member, and that she didn’t want to reopen the Article 50 negotiations.

So far, so mundane, but this hasn’t stopped some wondering if new leadership on both sides of the Channel might be a moment to change things more radically, as if the presence of Anne Widdecombe in the new Parliament is going to tip it all over the edge.

To keep that in perspective, we should keep in mind a number of salient points, which Helene von Bismarck beat me to this morning.

Firstly, von der Leyen is not Commission President: she is only the nominee for the job.

We’re still unclear as to whether the European Parliament will give her the necessary support, with the Green group already saying she’s not strong enough on environmental commitments. The S&D effectively hold the balance of power on this one, since there’s no great desire to have to rely on the support of groups beyond the 4-way centrist coalition (EPP-S&D-RE-Green). If the centre-left doesn’t go along with the deal, then we’re back into very uncertain waters for any of the top jobs.

Secondly, even successful in her appointment, von der Leyen won’t take office until the start of November, i.e. just after the current extension.

The reason for this is that as well her own appointment, she also has to navigate member states and the European Parliament through the confirmation of the rest of the Commission, with hearings in October and then a final vote. On the basis of previous exercises, there will be some nominees who don’t pass muster, plus a pile of other considerations that have to be addressed. The current Commission, under Jean-Claude Juncker, remains in office – albeit in a more caretaker fashion – until the new team is set.

Thirdly, it’s not von der Leyen’s (or Juncker’s) job to set Brexit policy, but to enact the intentions of member states.

If you need a reminder of how this works, visit the Commission’s Brexit pages and check out the mandate. The Commission represents the EU and its member states in the negotiations, but it doesn’t make unilateral decisions therein. Instead, it agrees lines with member states, negotiates them and then recommends outcomes for member states’ approval.

At best, the Commission President can suggest a line of action to the member states, but is bound by their decisions – that’s what all those brief Article 50 versions of the European Council are for.

Put together, we might see how von der Leyen is not a central part of the Brexit process at this stage, even if her views will count for something as we move towards her installation in office.

Any new Prime Minister coming into Number 10 will need to keep that in mind this summer as they work out how to advance their cause.