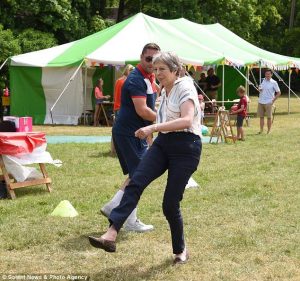 For younger readers, Millwall FC garnered much public interest in the 1980s for their forthright style of football and their supporters, whose chant of “nobody likes us, but we don’t care” resounded around stadiums (and punch-ups). Yes, things have moved on, but still the label has hung around.

Theresa May hasn’t yet got into any fist-fights, but she does seem to have adopted the F-Troop motto in these dying days of Article 50.

And they are dying days. With scarcely a week left, there is much talk of an extension, but the EU27 have been clear that re-negotiation of the Withdrawal Agreement remains off the table, so this is essentially about whether the UK signs up or shoves off.

May’s strategy of “my deal or no-deal” has led her inexorably to the current place and as last night’s televised statement showed, she has now reached a point of not even trying to sell the Agreement on its merits, but rather as the only way out of the impasse she has had a large part in creating.

Impressively, she appears to have turned some MPs that might have come round to supporting her in a Meaningful Vote 3 into much more vociferous opponents than before. The entire structure of her statement was that it was the Commons’ fault that delays had occurred and were to blame for it all: an odd strategy ahead of a vote early next week that would unlock the short Art.50 extension she had asked for just earlier that day.

And it’s not only the Commons that May doesn’t appear to be trying to charm. The EU too has been deeply unimpressed by her management of the extension request itself.

It has been clear for several weeks that an extension was necessary, and it’s always been clear that European Councils can’t make decisions there and then – especially if, as here, there’s been no prior discussion of positions – so to leave a request until 24 hours ahead of the meeting was always a recipe for further delay. Further complicate that by, a) not clearly asking for one particular length of extension, and b) more importantly, offering no justification for the extension other than a vague hope that “this time it’ll be different” on the Meaningful Vote, and it’s no surprise that the Commission and EU27 are spitting feathers.

This is all the odder for May’s approach hitherto of asking the EU to do her a favour in Art.50: this is such a slap in the face to them and makes granting an extension all the more difficult that one has to wonder what’s going on in Number 10.

As ever, I resist the “she’s stupid” explanation, because that neither helps us very much nor does it actually fit the evidence.

Instead, this all speaks to two general ideas.

The first is that May hasn’t got a Plan B. In keeping with the rest of her political career, she has set on a course and she will stick to that come hell or high water, unless and until she absolutely is forced to abandon it. And remember, that was an approach that didn’t always work, but did work enough to get her into Number 10, so the chances of her changing that model now are minimal.

The second is that nobody else has a viable plan. As much as it’s bad politics for May to tell everyone that they have no choice to do do as she wishes, it’s also apparent that everyone else is struggling to build up an alternative path through all this that might command broad support.

Yes, the choices still remain the same: revocation, deal or no-deal, with a side order of extension to delay having to choose among these. But none those combinations is the clear challenger to May’s approach.

The EU can’t do much more than set out conditions for an extension and hope the UK complies; Parliament can’t decide if it wants to take control of the process and, even if it does, where it might go; Tories talk a lot about removing May, but don’t do it; Cabinet is unhappy, but passive.

All of which brings us back to Millwall’s latest signing.