Tempting as it is to comment on the flurries of rumours flying around London and Brussels about what is (or, more accurately, isn’t) happening in the talks involving Geoffrey Cox, it’s probably best to hold fire until we know a bit more about it all.

Indeed, whatever the outcome (again, probably not much), the UK and EU will find themselves facing the same set of issues and hurdles.

With that in mind, I present three graphics that I’ve been working on this week.

First up, it’s helpful to consider what needs to happen in the UK to get to any final outcome you care to imagine.

To that end, this graphic maps out the shortest paths following the votes due next week: 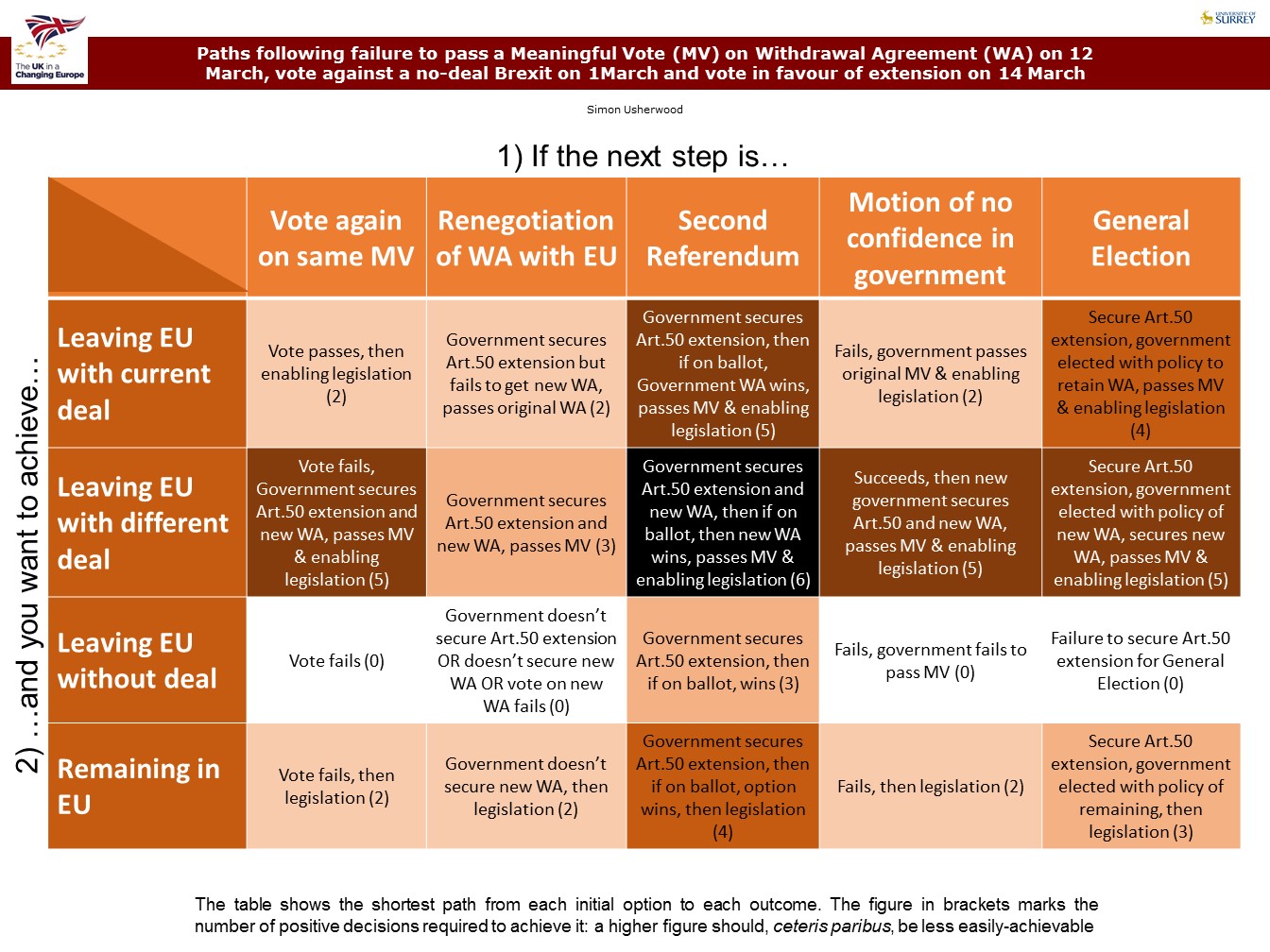 I’ve worked on the basis that a step consists of a positive and active decision being required, broken down as much as possible into discrete elements. However, it’s worth noting that some steps are much smaller/simpler than others, so the aggregate number is only a proxy.

It’s also important to note that I’m working here on a specific set of outcomes from the votes (as listed in the title): obviously, if the government wins the Meaningful Vote then things look rather different. However, the relative difficulty of different outcomes remains broadly the same.

That said, the messages should be evident.

No-deal remains the simplest outcome, because it requires (in almost all cases) no action to be taken: those seeking any other outcome have to overcome at least two steps to achieve their goal. Ironically, it is revocation that is the next simplest (on average), mainly because it’s the only other unilateral course of action open to the UK: everything else requires EU agreement and decisions.

At the other end of the spectrum, efforts to secure a different Withdrawal Agreement or to go to another referendum require many more steps to be taken. As I note in the graphic, that makes them less likely to be achieved. At the same time, the current situation was not the simplest, so don’t take this as a hard-and-fast guide.

The second graphic explores the question of extending Article 50 into and past the European elections that take place on 23-6 May.

The past week has seen some more concentrated thinking about this as a hindrance to extension, which looks very likely, even in the most benign situation of the government winning the Meaningful Vote next week. 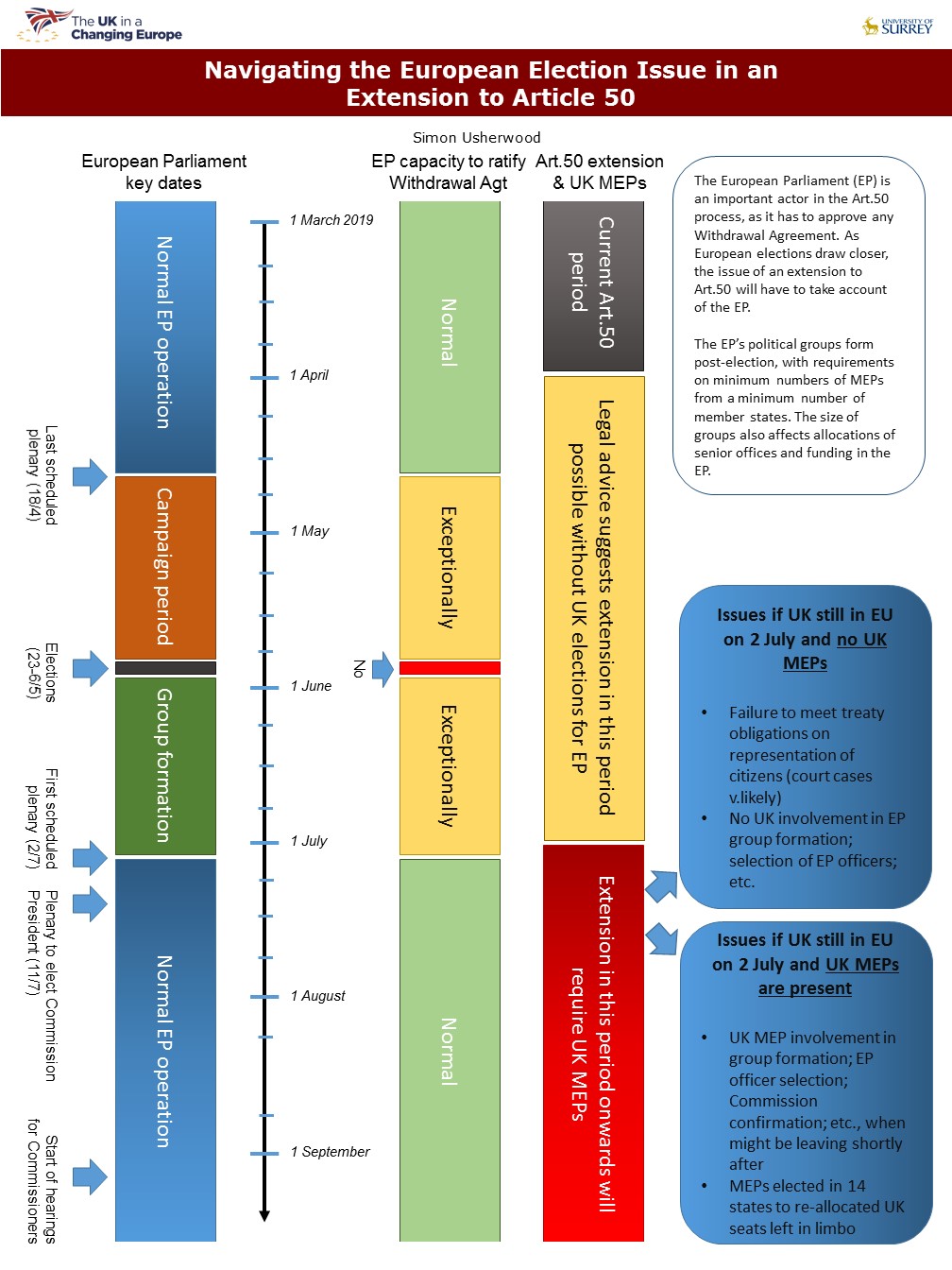 Contrary to some of the comments I’ve had on Twitter when I posted this, it doesn’t show that extension beyond end-June is impossible, but rather that it’s problematic.

The key focus has been on the (non-)existence of British MEPs in that situation, but the legal advice can only take us so far and it will need a Court of Justice opinion to settle the matter, probably in conjunction with an agreement in the European Council about whether the use of temporarily-appointed MEPs would cover the gap sufficiently. At present, there is enough uncertainty to suggest that there is scope for a political resolution to this question, even if it does cause other problems (bottom right box in the graphic).

However, it’s also useful to note that extension incurs problems on EP ratification. While the Parliament could be exceptionally recalled between 18 April and 1 July, that would not be a simple matter. Leaving it until after the new Parliament forms in July would be procedurally easily, although it brings back the question of UK representation and the potential challenges of a less-centrist composition that might cause problems.

Finally, let’s look at accidents, because this seems to be the most likely way in which the UK ends up with a no-deal outcome. 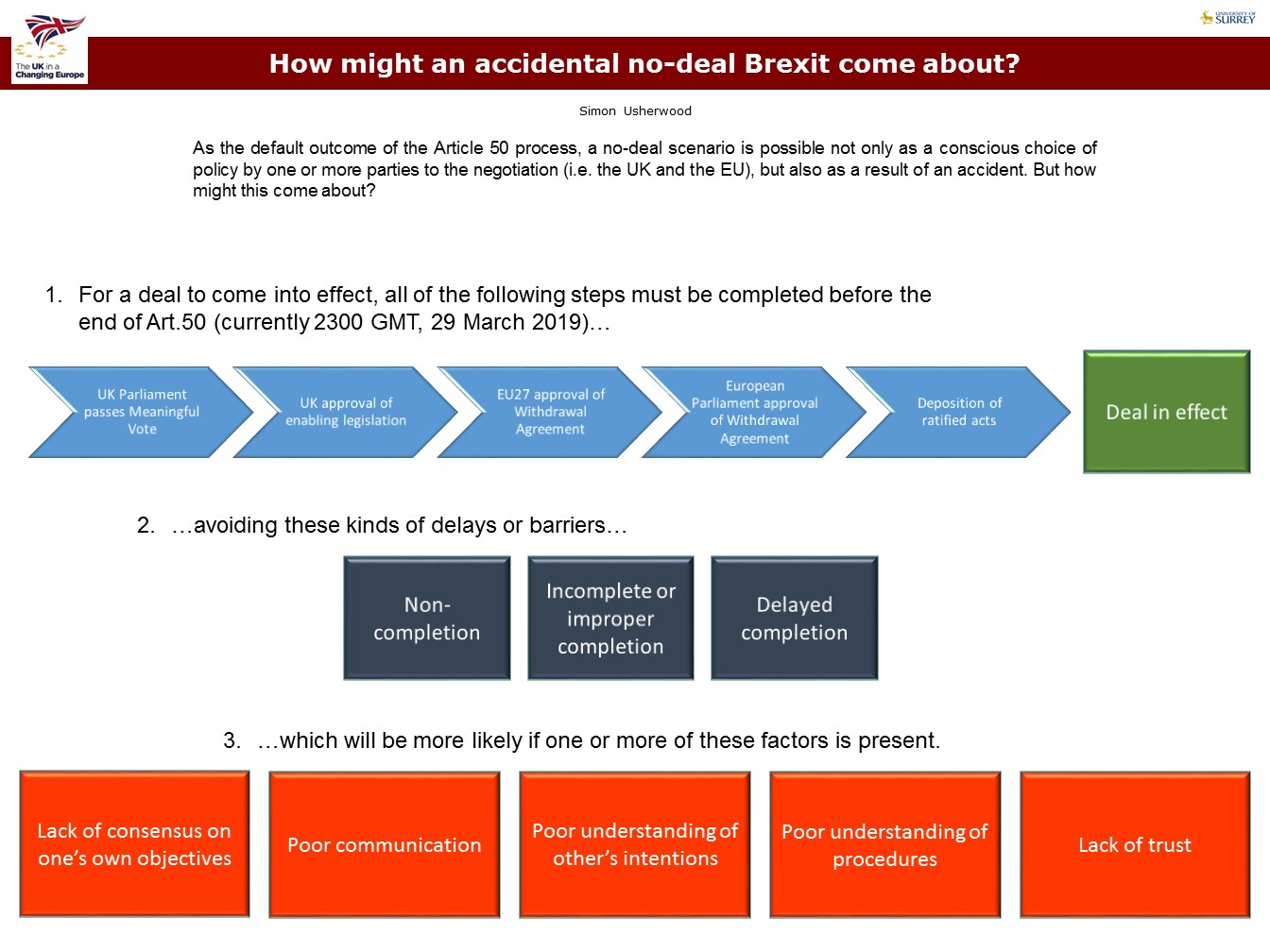 I discussed this in a thread last week (NB: the final GIF might be a bit strong for your taste), but I’ll underline that much of the potential for accidental no-deal could have been addressed by proper planning and preparation. However, at this stage in thAccidental No-Deale process, the capacity to do that is much more limited, thus raising the chances of it happening.

In sum, there’s a lot going on and a lot still to happen. Whether that can happen without more problems than strictly necessary remains a very moot point.