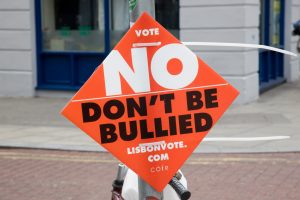 Away from Salzburg and its repeat performance of ‘how we don’t really understand each other‘, the question that I’m getting asked a lot is whether there can be a second referendum.

This is an interesting one, because it’s often asked of me by people who’d like to see the end of Brexit and a return to How Things Were. In that sense, it’s a bit of an advance on fighting the first referendum, time and again.

That’s not to say it’s a bad thing to pursue, but rather to invite some reflection on the politics of it all and especially the framing.

Importantly, much hangs on why a second referendum would be happening at all, since at present there is very little chance of this government taking this course of action.

That matters because right now the people pushing for it, as I’ve just mentioned, are those who clearly would like a result that allowed a stop to the process of leaving. The overnight comments of the Czech and Maltese PMs that they’d also support such a vote merely reinforces that impression.

If Theresa May were now to accept the need for a vote, it would go much against what she has previously argued and worked to, namely as limited as number of people making decisions as possible: remember how hard she fought against even just Parliament having a role.

For that to change, May would have to find herself fully out of alternative options, probably after a hostile Parliament left her no other choice. Despite everything, that still looks a long way off.

As long as a second vote looks more like a means to an end, rather than an end in itself, it will struggle to have the credibility of the 2016 referendum (insert any punchline you feel like here), at least in the sense of having a fighting chance to overturn that decision.

That problem is heightened by the very obvious challenge of what might be on the ballot paper.

The UCL Constitution Unit has written a series of fine pieces on this (here), looking at technical ways one could manage the various options, but ultimately this would be an intensely political choice.

Broadly speaking, either you’re offering voters a choice between leaving with a deal or leaving without one, or also adding in an option not to leave at all. And that’s on top of any issues around wording (which were already problematic last time around).

Because that basic choice will be a political one, it offers up much scope for campaigners to suggest that the exercise is ‘rigged’ in some way that hurts their interests: two of the three options are about leaving; two of the three are about a deal; why muddy the waters with staying at all?

That’s problematic if the object of the exercise is to calm passions and rebuild popular engagement with the process and with the political system at large. If nothing else, a three-way vote risks an outcome that ‘wins’ without an absolute majority of votes.

These problems are well-understood and form a big part of the resistance to holding another referendum, but it’s worth chucking a couple more points to ponder.

Firstly,it’s not clear what a second referendum would be on.

As a reminder, the Withdrawal Agreement (WA) is a very limited document. It covers the resolution of various liabilities arising from the end of UK membership, including finances, regulation and governance, plus some arrangements to bridge to whatever new relationship might arise in the future (as long as that arises by the end of 2020).

What that document doesn’t do is set out that new relationship. Yes, there’ll be a Political Declaration alongside the WA, but that will not have the same full force of law and will be necessarily vague about the aspirations that both sides in that still-to-be-started negotiation might have.

As such, ‘Chequers’ doesn’t really get much of a look-in; certainly not in the WA, and not very much in the Declaration. That makes it harder to mobilise a narrative of ‘rejecting Chequers’, because it’ll not be the locus of the documents under consideration.

Moreover, what is the locus is not that pretty for the UK. It’s about the settlement of financial liabilities, the creation of an Irish backstop, the continuation of legal and regulatory obligations and a transition period where the UK is a pure rule-taker. The counterbalancing goodies in the Declaration are promissory and vague.

If you wanted to get people to vote against that document, then you’d find it easy to paint a picture of a failed negotiation process and of an opportunity to escape the grasping hand of an EU that seems to just take and not give.

Here, the evidence is very mixed. John Curtice points to the centrality of economic calculations, while YouGov reminds us that there’s no clear consensus on any outcome. In short, there’s no slam-dunk on the table, for anyone.

That matters because a second referendum is likely to be a one-shot policy: the chances of a third vote within the medium-term would be effectively zero. As Sarah Ludford rightly noted at an event I spoke at this week, it’s the best change for Remainers to stop Brexit.  At the same time, I’d have to note that it comes with a sizeable risk of resulting in a no-deal outcome.

Taken together, all of this points to a number of substantial issues that campaigners on all sides will need to get their heads around and then actively prepare for. Otherwise, we might find that a second referendum leaves more questions open than before.