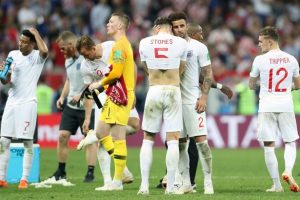 You do what you can, but that doesn’t mean success

At times this week it’s been hard to tell whether the flapping sound one can hear is that of England trying to avoid the build-up of excessive expectations, or of hard Brexiters fanning the flames of their ire.*

Since Friday’s Chequers meeting, numerous individuals have been working themselves up into states of apoplexy about things that have been rather self-evident for many months.

Probably the most emblematic comment came from Maria Caulfield in an interview with her local radio station yesterday, where she announced that a key reason for resigning as Vice-Chair of the Conservatives was that it has become apparent that Chequers was not the final deal, but merely a gambit in the Article 50 negotiations.

Given that no one had pretended otherwise, the biggest question is why this took four days to filter through.

Since I continue to dislike explanations that centre on stupidity, the best argument is that Caulfield’s move was part of a bigger programme of resistance within the party.

My view is that David Davis’ resignation on Monday wasn’t part of that resistance, at least not in the sense of being coordinated. He’d waited over the weekend, to allow many Cabinet colleagues to dip their hands in the blood of the deal, via op-eds and interviews, and his media activity on the day pointed to a desire to limit damage, be positioning himself as unable to support a deal that had Cabinet support.

If he’d really wanted to go to town on this, then he’d have walked down the Chequers driveway on Friday and stuck multiple knives into May, right there.

For Davis, this was probably the last realistic moment from him to step aside on a principled basis, given the apparent direction of travel: the explicit reaffirmation of collective responsibility on Friday was just as important as the text itself.

Once Davis left, Johnson had to make a quick decision about whether to follow. As many noted at the time, he wouldn’t look great whatever he chose (stay and look weak-willed; leave and look opportunistic), but given that his diminished base rests on his triumph in the referendum, departure was always going to be on the cards.

For now, Johnson is keeping his powder dry – either for today’s White Paper, or for a longer-term assault from the backbench later in the year, a la Churchill [sic] – which has meant that immediate scope for further Cabinet resignations is minimal, especially with Fox being brought onside with vague commitments on his department having a purpose.

Indeed, this week has underlined the strength and the weakness of resigning. If you play it right (think Howe), then you can make a huge impact; play it wrong and nothing really happens, except you’re now on the outside.

With Cabinet more locked down, attention moved to other positions of responsibility: this was the point where Caulfield and Ben Bradley moved to hand in their notices. That played to the internal party gallery, but outside has been of minimal interest. Plus, you can only resign once, so this was never going to be a long-term strategy.

Instead, the focus has now moved once more to where the hard Brexit grouping has most power: the chamber.

Last night saw the coordination of Tory and Labour MPs to move amendments to the Customs Bill. The aim is to find language that Labour will find attractive enough to support together with Tory rebels** that would either severely limit or even collapse the Chequers model.

While this approach has the merit of a more substantial base, it runs into several problems.

The first is that Labour might not play ball. The party’s position on whether or not to support the government through Article 50 changes daily, so it would be a foolish politician that sought to put any great stock in any one of those positions.

Secondly, defeat might simply underline the limits to hard Brexiters’ power within the Commons, and even within the Conservatives. Failure on this front of the campaign might risk exposing the ERG as a paper tiger.

And finally, even if successful, the effect of the amendments might be different to that intended. Kate Hoey’s amendment to prohibit any border in the Irish Sea might be meant to stop the backstop arrangements applying across the entire UK, but it also opens a door to a much softer form of Brexit based around an EEA model. Which isn’t what she wants.

All of this is symptomatic of where we now are in the Article 50 process.

The difficult decisions and compromises that have very obviously been needed are now actually starting to be made: that’s why some of the noises off this week have been so heart-felt. May’s approach of ambiguity and vagueness had some value in keeping people on-board, but ultimately it had to see some resolution down to a more fixed and partisan structure, not least because that will be essential in getting to an agreement within Article 50.

Thus today’s White Paper will be essential in that move.

And there is no doubt that we will hear much more flapping in the days to come.

* Flames of Ire will be the name of my death metal band, by the way, when I get around to setting one up.

** Not the same kind of rebels so bitterly castigated by hard Brexiters last time around, when they worked with Labour on amendments to the Withdrawal Bill.