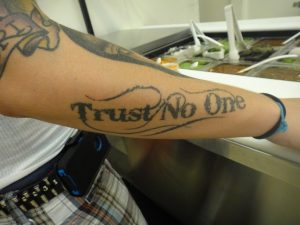 This week I found myself in one of the leafier parts of the stock-broker belt, giving an after-lunch talk on the Brexit process. As we pushed the meat-and-two-veg around the plates of the clubhouse, I listened to tales of how the Germans were trying to do what they didn’t manage in the world wars, and of how Whitehall was trying to spike the whole thing.

Tragically, for the bathos of this tale, cake wasn’t on the menu, but a rather good summer-fruit pudding instead.

This experience, plus the continued agonies of the government this week, invite me to consider the role of trust.

Trust is a central part of politics: indeed, one might argue it’s fundamental, given the need to work with others to achieve any political process or outcome.

At the same time, it’s also necessary to recognise that trust is sometimes in short supply, as in the case of Brexit: a lot of participants – both principals and the wider public – don’t trust any one, including those on ‘their own’ side.

Once again, I’ll take you back to some negotiation theory, because this isn’t an uncommon issue. The principled negotiation model that I’ve discussed before offers a number of strategies for dealing with those you don’t really trust: indeed, one of the motivations for using this approach is that it is grounded in always taking your relations with others with a pinch of salt.

The first key concept is that you’re trying to solve a problem, not a person. That means focusing your efforts on the matter in hand, but it also implies that you can be sympathetic to the other needs they might have, albeit without making it part of the negotiation. Indeed, being able to empathise with their situation might help you understand better how to address the problem you both face. Acknowledgement of how they feel doesn’t have to mean acceptance or concession, but rather opens up new ways to tackle and resolve the issue.

Secondly, and related to this, is the need to recognise and manage one’s emotions. Often there are problems of vicious circles of emotion, as each side becomes frustrated or annoyed by the other side’s frustration or annoyance. Being able to step out of one’s own self and see how you come across is a vital step in this: a useful rule of thumb is that if you don’t think you need to do this, then you need to do it. If you don’t want to dress it up in quite such grand terms, then it’s largely about being self-aware. As I’ve noted elsewhere, it’s not what you say that matters, but what people hear.

Linked to this is the notion of getting away from tit-for-tat. Old Testament-style an-eye-for-an-eye approaches might feel satisfying, but they tend to produce the kind of downward spirals just mentioned: retribution usually only begets more retribution. Instead, there has to be a willingness to step back from the brink of kicking back. This links to the first idea, inasmuch as if you can appreciate that they have emotions too, then you’re more likely to let them vent, so you can then get on with the core work of solving the problem. Sure, this can make you somewhat annoying, as you wait for them to finish, but if it produces results then that might be a price worth paying.

Incidentally, the Commission is doing a lot of this right now: letting the various factions in the UK put out their desires and vent their furies, before working through the issues of whatever document comes out of it all.

There’s a final idea here too, that takes me back to my Surrey lunch: the question of alternatives.

Usually in a negotiation, failure to agree leaves things as they were: you don’t buy the car, or sign the trade deal. But it’s also essential that you understand what the best alternative to an agreement might be, because if that’s not as good as what’s on offer in the negotiation, then you should take the negotiated outcome.

In the case of Brexit, the alternative to an agreed deal is departure from the EU in March 2019 with no deal. There is nothing either the Germans, or Whitehall, or anyone else can do to stop that happening, now that Article 50 has been invoked.

Moreover, the decision to invoke was the UK’s, with Parliament following the decision in the referendum, so it’s not an unforced error, but an outcome of democratic politics. Ultimately, that means that the outcome of all of this rests with the government laying a deal that it has agreed with the EU before Parliament to be approved: that too will be a democratic process.

Parliament thus already holds the power to frustrate the supposed will of others: what it has to decide is whether rejecting any final deal is better than accepting what is offered. That power can, and does translate into the ability to encourage the government to pursue certain objectives that it, Parliament, deem important, but that can only happen in a short window between new and the autumn.

Whether everyone can hold their emotions in check in the coming weeks remains to be seen.