As we enter a period of heightened debate about customs arrangements, it’s useful to 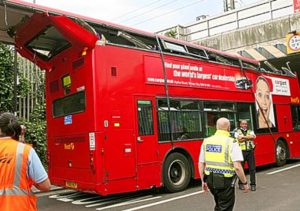 consider who holds what power in the Article 50 process.

As rational choice bods like to tell us, the more people who hold vetoes, the harder it is to please them all and more chance there is of non-agreement. However, in this case – and unlike most others – a non-agreement is not the same as the status quo ante.

Instead, Article 50 leads to the UK leaving on 29 March 2019 without a deal, unless something is agreed otherwise (either on the deal front or the date front, or both).

This matters, because it potentially changes the calculations within the UK about crashing the Brexit bus.

But first a quick word about why I’m going to focus on the UK.

The EU has always sought an orderly and speedy resolution of Brexit, both because it wants to maintain good relations and because this is the best way to get it off the table, to allow the EU to crack on with everything else it’s got to do. While it can live with a no-deal outcome, it has given no indication that it wants this and indeed been responsible for producing most of the detail that has been agreed so far. Even the stuff that hasn’t been agreed is largely framed by the EU – think of the Irish options – so bus-crashing is not going to come, in the first instance, from their side.

So back to the UK.

Let’s think about who holds veto powers over Theresa May, who we’ll take as the prime mover in advancing Article 50 on the British side. Clearly others are deeply involved, but as Prime Minister she holds the reins of power.

First port of call is Cabinet. If it presents a sufficiently unified front of opposition to May, then it leaves her with little scope to advance her agenda (whatever it might be). The Rudd-induced reshuffle last week has shown how this might work, with hard Brexiters gaining an upper hand. But likewise it also shows the limitations, with a Prime Minister and Chancellor willing to continue pushing a softer line. That suggests that removal of May would likely be necessary to effect a radical change of policy.

Which brings us to the Conservative party. MPs hold the power to remove May and cause a leadership election. However, some caveats apply here too. Most obviously, the parliamentary party has limited scope to control who replaces May: unless they can crown a unity candidate – unlikely, if they’ve kicked out May – they have to take their two preferred choices to the wider party. Secondly, replacing May means opening up a possibility of another general election, especially if Brexit policy changes clearly, and the farce of last year is still a bit too raw, even if Jeremy Corbyn doesn’t look quite as challenging as before. And thirdly, The only point of replacing May now would be to secure a different deal within Article 50, rather than killing it all off.

And that raises a different route for bus-crashing. If the party’s interest is in a hard Brexit, then it’s simpler just to try and frustrate the current leadership and play for time. As long as they can run it all out to next March, then the job’s done. Framed as May’s inability to lead/listen/reflect the will of the people/etc, that puts more of the blame on her and allows a new leader to come in and try to clear up the mess she’s made (sic).

However, all this depends on a third key actor: the Labour party.

If Labour decides to use the opportunity now or in the meaningful vote to wreck the Conservatives, then they make it much easier for hard Brexiters to secure a no-deal: there are more than enough of the latter to deprive the government of a majority to pass a package that the EU says it will not amend.

Of course, if Labour decide that an orderly – if imperfect – exit is more important than party politics (and their thoughts are very unclear on this right now), then the opposite applies: May can withstand hard Brexiter pressure much more effectively.

And in either case, Labour votes would swamp any effect of DUP ones, which would seem to render their role in supporting the Conservatives rather moot.

The first is simply that this arrangement of veto players has been in place for some long time now, certainly since the general election. And yet none of the bus-crashing options has taken place: everyone’s make lots of noise, but action has been short on the ground.

Given the time-bounded nature of Article 50, if hard Brexiters wanted a new leadership to negotiate a harder agreed deal, then sooner would have been better than latter. This suggests that either they didn’t feel confident they could remove May, or that she would succumb to pressure, or that they might better aim for the delay-to-cause-no-deal option.

All three of those still look possible, although as time passes the emphasis swings to the last one.

And this leads to the two thought, namely that May is well aware of the pressures and is seeking to play them off each other.

The prevarication over customs arrangements is very much a case in point. Neither the customs partnership nor the maximum facilitation option is currently acceptable to the EU, so this is much more about setting the tone for the future relationship. The former points towards staying in a customs union until the details can be worked out, while the latter suggests the UK leaves at the end of transition and then works to reduce the barriers that causes. In short, it’s the politics of the long transition once again, in different clothing.

For May, time is both a problem and a help. It’s a problem because she still needs to get to a deal by October – given the lack of movement on Ireland, that looks difficult – but it’s also a help in managing her domestic veto players.

The longer she can postpone a final reckoning, the less time is left for a new administration to change course, and the more costs any bus-crashers will carry: she can off-load more of the blame on to them, in effect. That can be seen in the likely timing of Parliament’s ‘meaningful vote’, which will come so late as to make it meaningless and allow May to ask opponents on both sides of the House whether they want to be the ones to wreck it all.

TINA will be the rallying cry: it’s not good, but it’s the only option on table.

That’s a risky game to play, precisely because Article 50’s default is exit with no deal. If this is May’s strategy, then she has to rely not only on a substantial section of her party not to eject her, but also on a Labour party that struggles to know how to proceed.

The bus is still on the road, but the hairpins are still to come.