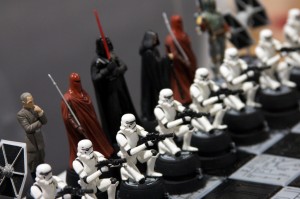 I’m a great one for clickbait, so this week’s title was a no-brainer. And since you’re wondering how I’m going to manage this (almost as much as I am), let’s get stuck in.

Given that I’ve already had a bash at this particular mash-up – which mainly seems to slur further the name of Jar Jar – I want to take a different tack and think not so much about the storylines of the films and of the EU, but instead the campaigning around them.

In both cases, we find ourselves deep in the mire of active campaigning, trying to sell us a vision. That rests on both utilitarian and affective grounds. For the films, the utilitarian aspect comes from seeing a trailer that looks amazing and exciting and generally like ‘a good film to go and see’; for the EU, it’s a more prosaic process of talking about the costs and benefits of membership. Affectively, Star Wars makes a big play for your childhood memories – i.e. before they got sullied by certain, later additions to the canon – while the referendum activists spend much time talking of our island history, or our European vocation, or future as a global player.

In short, there’s a lot of selling going on.

Of course, there are hardened bands of those deeply into their interest in the subject, familiar with the nuances and lesser-spotted aspects thereon. Their interventions are largely well-intentioned, and occasionally useful, but strike the rest of us as a little bit too obsessive.* There is, after all, more to like than a film/international organisation.

But there the similarities have to come to an end. One is a one-sided onslaught of marketing to get us to consume a product, while the other is a contest between at least two different points of view about the nature of our national political organisation. One requires us to debate what we want, the other only to sit and watch/buy.

It’s important to remember this distinction, because what we do see in the referendum campaigning is the start of the selling of key messages, and there the distinction doesn’t look so marked. For the Leavers, their greatest potential strength lies in articulating an alternative vision for the UK: if they can produce the trailer, then they might get the chance to make the film. For the Remainers, the equivalent would be crafting a message that buys into a set of values that voters can positively associate with membership: there might be some mis-steps, but stick with the franchise that’s been part of your lives.

The problem is that neither side looks particular close to achieving those best-case scenarios: they’re closer to Hoth than to Endor.

Which is all rather rubbish for the rest of us. And as far as the EU referendum is concerned, we don’t have the option of just checking out another policy debate in the political multiplex: whether or not we like the product, we have to recognise that the campaign and the outcome affect us. As much as there are people out there who think Star Wars is the most important thing (I appear to be friends with several of them on Facebook), the unwillingness of publics across Europe to participate in the social and political debate about their governance and government is a significantly more problematic issue.

Democracy’s lifeblood is participation: without it, everything else fails. We need to remember that the spectacle might be thrilling to watch, but it is a spectacle that we should be a part of, because it’s about our lives and our futures.

Whether you want to bring down an oppressive regime, or contain a group of dangerous radicals, or you just want a quiet drink in the Mos Eisley Cantina, then you need to be the one going out there and making it happen. And you don’t need the Force, you just need your voice.

* And yes, I’m well aware that as someone who’s written a weekly blog about this kind of thing for several years, you might well consider me to be part of this group.