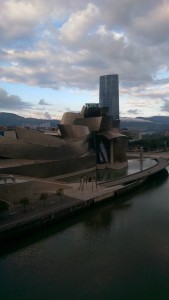 I’m just back from the UACES annual conference in Bilbao where there was a lot of talk about the referendum and about euroscepticism. Nice as it was to have good turnouts for those panels, and to be buttonholed in the coffee breaks and drinks receptions, it was also clear that there was widespread disquiet about the situation in Europe, and in the UK in particular.

Now, UACES has more people positively disposed to the EU than the average gathering, and I’d be lying if I said I’d not heard the kind of views one finds more typically in the corridors of the institutions, about the wrong-headedness of it all. But that view was a very distinctly minority pursuit. Most people accepted that critical attitudes where a valid and serious part of the European system, but looked askance at the state of the response.

David Cameron stood as exhibit number one in this. There was not a simple kind word said about his European policy: at best, he was a fool, at worst an idiot. I probably tend to the former, although the last few weeks have encouraged me to move towards the latter.

The basic problem identified by delegate after delegate was the absence of a coherent policy, particularly with respect to what the UK should be trying to achieve. My own view – that Cameron is fundamentally driven by party management and by a desire that European policy shouldn’t stop him achieving his other policy goals – chimes with that. In particular, the apparent lack of learning in his encounters with the Tory sceptic hardcore doesn’t instil any great confidence. Jon Worth’s very nice piece is well worth a read on this, but my impression was that his question in its title had the obvious response that Cameron clearly doesn’t know what he’s doing.

So we’re all heading to hell in the proverbial handcart, right? Only in a banal sense that no-one seems to have a firm grip on the management of British European policy, so no-one’s likely to feel very happy about what happens.

More interesting though was the discussion at UACES about what comes next.

Just as all sides seem to have decided already that the referendum will be a wash-out for producing a decisive conclusion to the matter, so too have most academics interested in it decided that it can only be a waypoint.

Three reasons why this should be immediately leap out. Firstly, most people don’t seem very motivated or engaged by the issue, so turnout’s likely to be quiet low. Secondly, most people don’t have strong views on it all, so a decisive majority either way looks improbable. Finally, the Cameronian tactic of opaque renegotiations means that the meaning of ‘Remain’ or ‘Leave’ has not been defined (and almost certainly won’t be by the time of the vote).

So we’re likely to end up with an ambivalent outcome. I offered a scenario to colleagues of a 51% ‘Leave’ majority, on a 30% turnout: what then?

Well, a result’s a result, so that would mean opening Art.50 negotiations to exit. But then it gets tricky. As a couple of speakers (like David Phinnemore) pointed out, Art.50 isn’t the clearest piece of treaty text, and the historic unwillingness of the Union to compromise its decision-making autonomy to non-members, makes it very hard to see how the UK could get a deal that lets it keep the benefits that many sceptics claim lie in wait, without also having to pay a very substantial price, politically and/or financially.

The other complication that we have to remember is that Cameron has committed to leaving Number 10 after this term. Assuming he’s going to give his successor some time to make a good impression for the 2020 general election, then it’s going to be full-tilt in the leadership campaign as the Art.50 negotiations come towards some conclusion.

Now one might envisage a situation where the transition and long-run costs of exit become ever more clear. This would be especially likely if the siren voices of business followed through on their claims/threats of relocation and downsizing; although I’m more with the sceptics on this, who note that nothing really came of not joining the euro in the late 1990s. However, that might become irrelevant if the noises from Germany about formal treaty renegotiation come to fruition after the 2017 federal elections.

If that happened, then a new opportunity opens up, to claim a more significant package for the UK than Cameron could manage now. A new Tory leader might decide that this be enough to assuage some sceptics and – more critically – to convince the wider public of the desirability of staying in. Thus, Art.50 gets rolled up into an IGC, on which the UK has to hold a referendum in any case: the government would simply say that acceptance of the treaty reform would constitute a vote for continued membership, overriding this vote. And we go back to where we were, more or less.

Now that’s a very large number of ifs and buts, but stranger things have happened (like this referendum, for example). It would be true to current policy, if that it was all about making it up as you went along, but it also points to the scope for finding a way back.

I’ll confess that if such a situation did come to pass I’d be deeply unhappy. It would mean a further weakening of public confidence in government policy-making and general competence, and it would look deeply Machiavellian (because it is): the EU probably wouldn’t come out of it looking any better in the UK than it already does.

At the same time, as long as we continue to fail to develop a real, meaningful national debate about the UK’s place in the world and – by extension – in Europe and the EU, we’re doomed to this constant messing about. Academics can help support that debate, but they can’t be the only ones.

PS – I meant several readers of this blog in Bilbao and I was very heartened by your kind words and encouragement. It’s also nice to be able to tell my family that other people do read what I write.