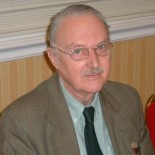 I found out about John Pinder’s passing by chance, talking with a colleague about something else. In a way, it was fitting, for my interactions with John have been largely down to chances that I have been very glad I’ve taken.

John was my supervisor for my dissertation at the College of Europe back in the mid-1990s, an arrangement that was mainly a function of my interest in the British debate on the single currenct. Throughout that year, I learnt a lot from John, both about the subject and about how to work with students. His attention to detail and his scope of knowledge were only surpassed by the genuine enthusiasm that he brought to conversations and the care he had to enable others to achieve their best. Certainly, no other professor at the College took his students to the local brewery at the end of the year!

Most impressively of all, for someone with such a reputation as an ardent federalist, he never sought to force others to cleave to his worldview, but rather tried to communicate it on its merits. I wouldn’t describe myself as a federalist, but I felt that not only did John respect that, but that I had come to respect his position too.

A part of that respect came from the shear depth of his experience. I remember mentioning to him that I had been on College trip to The Hague for an event to celebrate the 50th anniversary of the 1948 Congress, to which he happily told about what that Congress had been like when he had attended it! The crossing of paths with most of the key figures in post-war European integration made him not merely a repository of facts and connections but a hugely informed (and informative) writer and speaker.

As such, I was very happy to have John contact me – more or less out of the blue – while I was doing my PhD in London, to ask for help in producing a book he was writing for Oxford University Press. Many hours of digging around archives and websites later, John was good enough to sit down and talk about his text with me.

That talk and that work formed the basis for me becoming John’s co-author on the second edition of the book (and its third). John certainly didn’t need me to be more involved: I have yet to meet someone with such a prodigious rate of writing as him. However, his willingness to share, to debate and to support a fresh-faced young academic were typical of the man.

For me, the lasting memory will be of talking with John at a conference dinner in Zagreb some ten years ago.

John had just been awarded the very first Lifetime Achievement Award by UACES, in recognition of all that he had done both as an academic and as a practitioner. It would be fair to say that John looked a bit sheepish about it all, not least because (in his words) “when you get an award like this, it usually means you’re about to die.” But to see so many people come and celebrate his work, and to do it in a city that captured so many of the changes that had taken place during his life, was something that I know meant a lot to him.

He was, of course, wrong about being about to die – certainly he continued to produce text for many years thereafter. Whether many of us will be that active in our 80s is a moot point.

Whatever one’s politics, I would hope that we could all agree that John was engaged. Engaged with his work, engaged with his community, engaged with the world. His death should give us all a moment’s pause to reflect on whether we are as engaged as him in trying to make things happen.